Throughout 2022, Nebraska’s Natural Resources Districts (NRDs) will celebrate 50 years of protecting lives, property and the future. During the next 12 months, the NRDs will commemorate breakthroughs and achievements in conservation.

“In the past 50 years, NRDs have adapted while facing changes in technology, funding, legislation, agencies and society,” said Jim Eschliman, Nebraska Association of Resources Districts president. “Nebraska’s locally led conservation model has been a successful legacy because of our ability to adapt to the local needs of our communities.”

After the devastation of the Dust Bowl, special purpose districts were developed to solve local soil and water-related problems. But the puzzle of overlapping authorities and responsibilities provided confusion at best.

Today, Nebraska’s unique system of locally controlled, watershed-based conservation is widely admired throughout the nation. In recent years, at least 11 states ranging from Washington to Arkansas and Illinois to California, have inquired about applying a similar system for natural resources management. Despite being the No. 1 irrigated state in the nation, Nebraska’s statewide groundwater levels have been sustained at levels less than a foot below pre-irrigation development in the 1950s. In many areas, groundwater levels are higher.

Across the state, NRDs construct projects, implement programs and offer a major source of assistance to landowners in conservation and natural resources management. When necessary, they enact regulations to protect our resources. While all NRDs share the 12 main responsibilities, each district sets its own priorities and develops its own programs to best serve and protect Nebraska’s natural resources.

Eschliman noted that Nebraska’s NRDs will continue to build upon, refine, and adapt as they look to the future.

“Conservation is something that impacts us all and we need to pitch in and be good stewards of our land and water,” he said. “Locally elected NRD boards across the state are uniquely positioned in their communities to help manage our natural resources for future generations.”

To join in the 50th anniversary celebration and follow the Natural Resources Districts’ special activities throughout 2022, visit nrdnet.org and follow #Since1972 on social media.

*Please note that beginning in 2018, both the Owner and Operator are required to sign.

Click this video to observe a chemigation inspection conducted by the LRNRD. Chemigation Operation and Inspection (LRNRD) on Vimeo

Watch this video that related to the agri-chemical pump and a potential failure from systems being operated remotely. Chemigation Agrichemical Pump Shutoff (LRNRD) on Vimeo 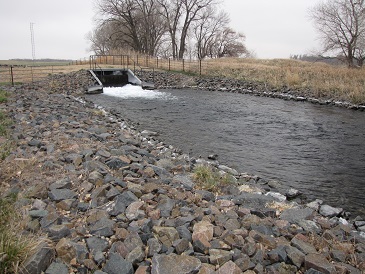 Check out this awesome, informative video about the augmentation project south of North Platte

Click on the link below to go to the DNR website to look up wells.  At the bottom of the page you can access On-line Options and Information which has forms you may need to change ownership, making a well inactive, modification, etc.

Click on the link with the compatible excel for your computer and enable editing on the bar at the top.  Choose meter type, type in Field Name and click on Make Field.  At the bottom of the screen is a tab with the Field Name you just entered.  Click on that and it will take you into the calculator sheet.

If you prefer a paper method, you can use this  pdf Printable Formula .